“We are all part of the solution and we must cooperate” 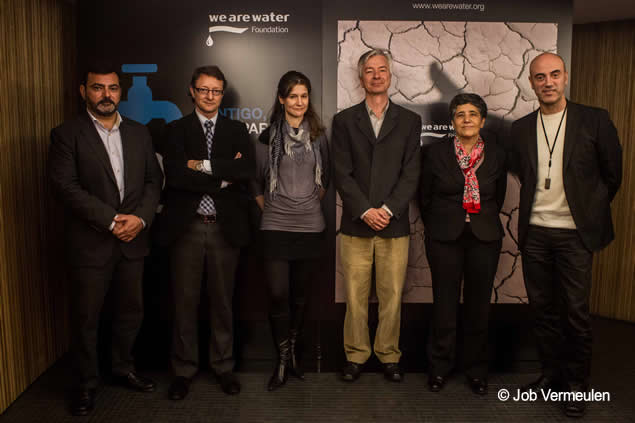 The importance of interdisciplinary collaboration was made very clear in the round table discussion organised by the We Are Water Foundation, on the 20th of March, in the Roca Barcelona Gallery, with the title Formulas for realising cooperation in questions of water. With the introduction and chairing by Xavier Torras, director of the We Are Water Foundation, five specialists exchanged know-how and experiences in questions of water and international cooperation with the aim of the fair development of hydric resources in the world. The members of the round table were: Josefina Maestu, director of the United Nations Office of Support for the Decade for Action "Water for Life" 2005-2015; Dr. Sergi Sabater, sub-director del ICRA (Institut Català de Recerca de l'Aigua) and head of the Resources and Ecosystems Area; Tomás Molina, journalist and meteorologist at Televisió de Catalunya; Sergio Moratón, delegate of the Vicente Ferrer Foundation in the Valencia Autonomous and Murcia Region; and Blanca Carazo, head of Cooperation and Development of UNICEF Spain.

Xavier Torras opened the debate, and pointed out the importance of World Water Day, presenting the important data that the UN handles to focus on the problems of water. The director of the We Are Water Foundation stressed the accelerated increase of the world population, which currently stands at 7.1 billion people, as the most relevant data before the need to act on questions of water, and underlined the importance of sanitation in the development of a fair and dignified life for people. "The population is increasingly aware of the problems caused by lack of water", he stated, "and sanitation and hygiene systems are appreciated as the most important development of humanity". Torras also explained the conclusions of the barometer study Sensitivity towards saving water in Spain which the We Are Water Foundation has promoted and has had as an objective to measure variables such as the degree of concern of the population for environmental problems and for the amount of water available. 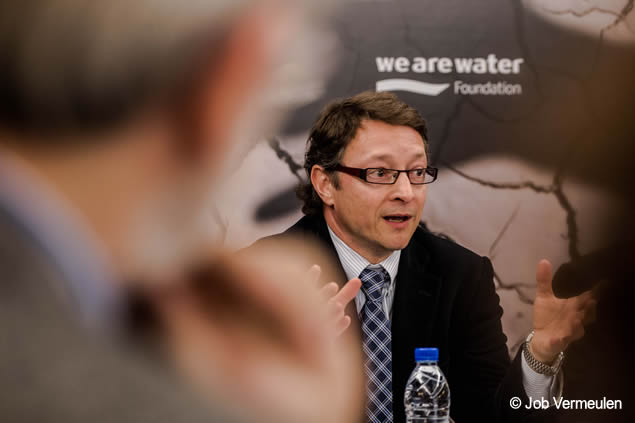 The importance of global cooperation

Josefina Maestu spoke first, underlining the importance of international cooperation to achieve the Millennium Goals: "Governments, companies, NGOs and civil society. We are all part of the solution and must act jointly". She also highlighted the importance of World Water Day this year since the UN is defining the post-2015 Agenda, the goals of which project the solution to the problems of water to all sectors of human development, such as education, empowerment of women and health. Maestu emphasised the progress made between 1990 and 2010, a period during which some 2 billion people achieved improved access to drinking water, and pointed out that the areas where the most serious problems were concentrated were sub-Saharan Africa: "The situation worsens for the uncontrolled growth of the cities and we should realise that in Africa and Asia the demand for water will double in 2050 compared to that of 2000." 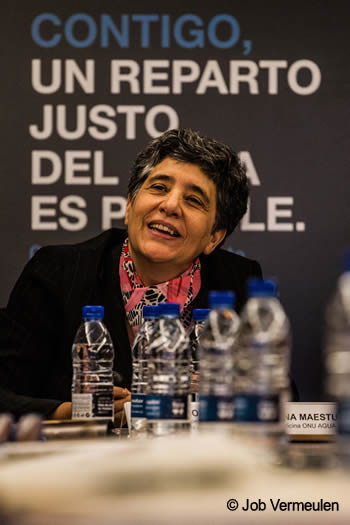 The director of the United Nations Office of Support for the Decade for Action "Water for Life" 2005-2015, pointed out the importance of the fight against the practice of open-air defecation and the consequent emphasis that the UN is placing on the development of suitable sanitation. On this question she explained the key points of resolution 64/292 of the United Nations Assembly regarding the definition of the quality of water and sanitation, and highlighted the inclusion of suitable hygiene in the objectives for after 2015: "In 20125 we want to be able to confirm that open-air defecation does not exist."

The need for scientific investigation

The next speaker was Sergi Sabater who explained the role that science is having in the investigation of water. He highlighted the main problems that represent challenges for science: the quality of water, in terms of its healthiness; and the quality, in terms of the amount required to meet human needs. "Both concepts, quality and quantity, are related", stated Sabater, "and depend on the sources available at a surface and subterranean level. These resources must be protected, and this is an absolute priority and must be on the agendas of all the governments. We must work with a global perspective, since we must share the planet, and to find solutions at a local level." The scientist pointed out that science and technology progress to achieve these goals that involve different methods according to the geographic position and socioeconomic structure. "Science is not a luxury", he stressed, "What is invested in science always comes back to society sooner or later."

The evidence of climate change

Tomás Molina then gave a summary of the data available regarding climate change, especially that referring to rainfall and evaporation, and pointed out its evidence: "Although it is very tricky making climate forecasts for the future, climate change is a reality and cannot now be avoided: the Earth is going to heat up by 4º C during the 21st century. We will have to adapt." The meteorologist explained very clearly the factors that define the study of rainfall and how these are used to define the states of drought and to be able to act to alleviate the damage. "It is not so important how much it rains, but how it rains", explained Molina, who stressed the importance of aridity on the repercussion of drought and that, parallel to the increase in temperature in the world, it is going to rain less in the conflictive zones and water will evaporate more. 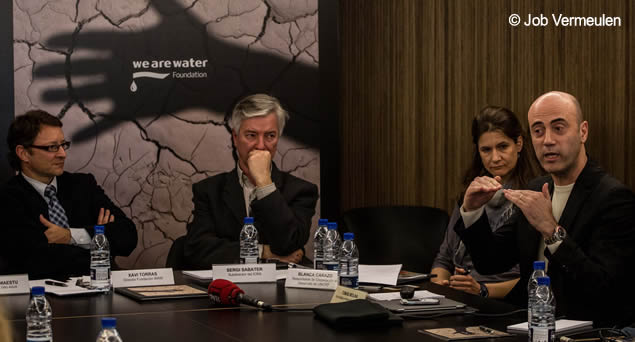 Water as a stabiliser and balancer of the territory

The next speaker was Sergio Moratón, who firstly summed up the work that for the last 44 years the Vicente Ferrer Foundation has been undertaking in India, specifically in the region of Anantapur, the driest inhabited part of the country. After explaining the climatic and social situation of the zone, the delegate of the Vicente Ferrer Foundation in the Valencia Autonomous Community and Murcia, explained the importance of water as a stabiliser of the territory and the basis of all social justice and development: "Rural society depends on agriculture, which consumes 80% of hydric resources. Without water migratory movements are constant and mainly end up in the cities, in large pockets of poverty. With water, farmers can stay in their lands, have a source of income that provides them with a dignified life and can follow plans of education and health, women are empowered and society is balanced." Moratón highlighted some of the solutions that are being applied in the region, such as the creation of small self-managed lakes and specific irrigation systems, such as drip irrigation, which saves water and allows an increase in production, diversifying crops and introducing livestock and the attainment of biogas. The representative of the Vicente Ferrer Foundation showed the projects undertaken jointly with the We Are Water Foundation, such as the lake in Ganjikunta and of the development of drip irrigation systems that are enabling these objectives to be achieved. 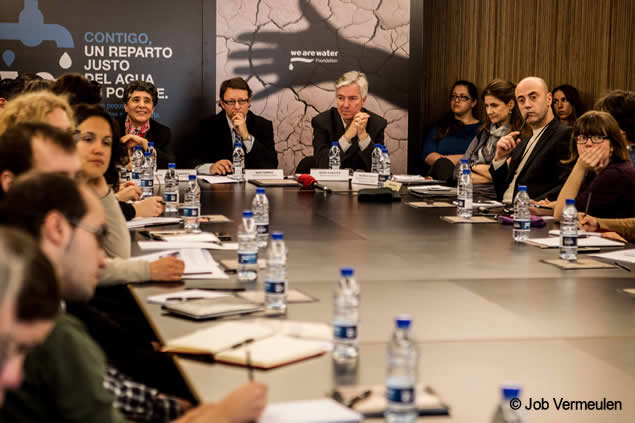 The importance of hygiene

The final speaker, Blanca Carazo, explained the objectives of UNICEF, which are based on ensuring the right to water and sanitation of all children. She placed special emphasis on the direct relationship between water and health and how it affects the child population, the most vulnerable section: "Diarrhoea is one of the main causes of child mortality and children get it through lack of sanitation or suitable hygienic habits. The simple fact of washing your hands after defecating and before eating saves many lives and we must continue moving forward in the diffusion of this knowledge." The head of Cooperation and Development of UNICEF in Spain highlighted the importance of suitable sanitation services for women in the most depressed regions of the world: "If women have to go outside the home to defecate, they do it at night to safeguard their dignity, which for them represents the danger of being attacked and raped. On the other hand, there are also many young girls who on reaching the age of menstruation stop going to class due to lack of privacy in the services. Women also suffer from a lack of access to education since in many rural societies, for example in Africa, they are responsible for looking for it and that is why they miss school". Carazo highlighted the projects undertaken by the We Are Water Foundation in Guinea-Bissau and the Democratic Republic of the Congo, as well as the one currently being developed in Bolivia, and stressed the importance of education in hygienic habits, one of the great objectives of the WASH programme (Water, sanitation and Hygiene) of UNICEF: "The sign of success is when a healthy habit is acquired, such as washing your hands before eating."