Cooperation, a key factor for sustainability

- The experts gathered in Zaragoza debated the results of diverse models of management and defined the route map for this decisive year of 2013 .

- Before the International Year of Water Cooperation, mutual trust and understanding are essential for effective common action.

- The We Are Water Foundation took part in the conference within the setting of its collaboration with UN Water. 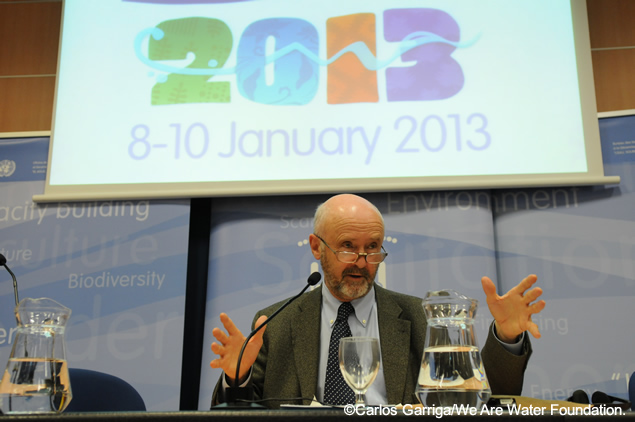 As a preface to the International Year of Water Cooperation 2013 and World Water Day 2013, The International Annual UN Water Zaragoza Conference 2012/2013, which was held from the 8-10 of January in Zaragoza, focused on how to realise cooperation in questions of water and fix the guidelines and key factors to follow in themes of cooperation for this year.

The conclusions of this international meeting, which is held every year and organised by UN water, revolved around the best focuses and experiences that have been presented to achieve more effective cooperation at all levels and at all scales, and to improve, above all, in questions of more effective and long-lasting management systems. The work was also focused on setting the lines of debate and the messages in light of the International Year of Water Cooperation.

This forum brought together more than 80 representatives of international institutions and governments from around the world and enjoyed the participation of political and expert figures from diverse countries, such as Spain, Portugal, Hungary, Finland, Russia, Mexico, Brazil, Peru, Bolivia, Guatemala, Senegal, Ethiopia, Kenya, Myanmar and Madagascar, among others; as well as international institutions such as UN Water, UNESCO, the World Bank, the FAO, and the UN Global Compact, among others. 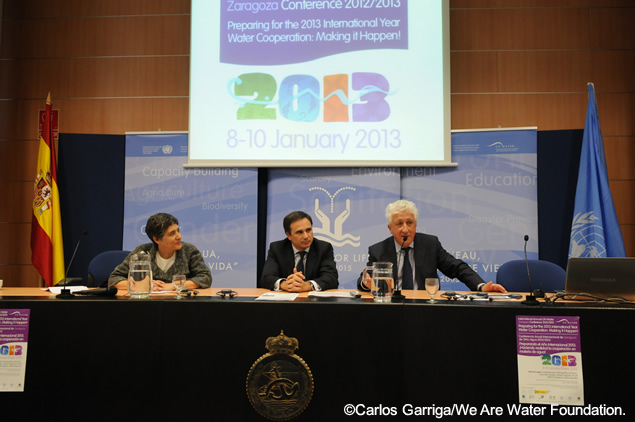 From the desire to understand to sustainable management

The value of mutual trust, mutual understanding and comprehension of the real needs of the communities involved in water management, above all when it is scarce, were common values in the distinct initiatives presented throughout the conference.

Very diverse experiences were approached, in both rural areas and cities and between countries and drainage basins. According to each community, the problems are very distinct, as well as their socioeconomic circumstances, and the importance of finding meeting points to evaluate the best and worst in the models that are being used in each specific case was clearly shown and, above all, cooperating in the search for more effective models and which are more easily applicable. In this context, all the participants agreed that cooperation is a fundamental value and key to achieving sustainability in the management of hydric resources.

According to the UN, in the last 50 years 37 cases of violence have been reported between countries because of water. However, and this brings hope, over 200 international treaties have been signed, successfully negotiated and put into practice in the same period. This item of data clearly shows that there is a desire for understanding by necessity, a concept captured during this conference.

In these conferences, experiences were shared regarding micro-irrigation in small agricultural communities from countries as diverse as Peru, Kenya, Guatemala, Bolivia, Madagascar, Ethiopia and India. Also dealt with were examples of multi-sectorial collaboration in different cities in the world, among which were included the case of Zaragoza, and diverse alliances were explained between very different agents, from both the public and private sector regarding water management. 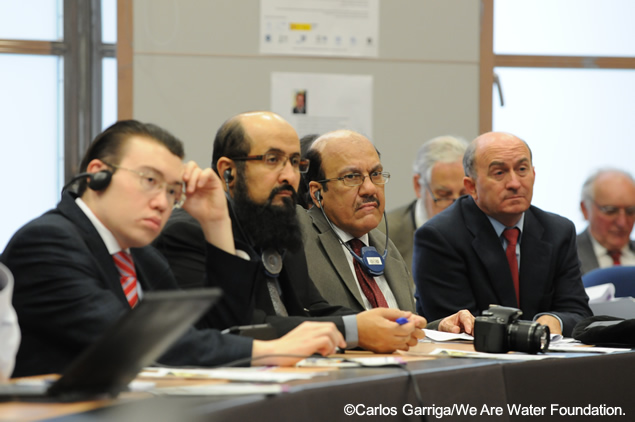 Representatives from different countries, basins and organizations participate in the conference.

Cases such as that of Kenya and Bolivia have shown that the existence of a legal framework that supports the creation of collective management organisations is fundamental, but above all it is essential that the laws are applied. This leads to the necessity for coexistence between penalisation and incentive systems to develop a real and effective model of cooperative management. On the other hand, it was also pointed out that, although it is fundamental that this political will is reflected in the laws, implementation must come from the organisations and institutions operating at a local level. For example, in the cases of Peru and Kenya the difference between subjective visions regarding suitable solutions was explained, underlining the failure resulting from imposing new technologies or irrigation systems on traditional practices.

The conclusion was also reached that funding, though very important, is not the only determining factor; since in many cases the creation of communities of users has been possible due to the support of cooperation and mutual support between distinct sectors and users. "Trust is the cement of the building of cooperation in water. We must invest in generating trust", stated Víctor Viñuales, director of ECODES (Ecology and Development Foundation) along these lines, who presented the case of Zaragoza as an example of a city committed to its environment.

Another outstanding theme was the overexploitation of aquifers, the control of which through collective organisations, such as the users' communities, is essential. Within this problem, a successful reference has been the case of the aquifer of Baix Llobregat, in Barcelona, as a model of how the common conscience of cooperation among the irrigators has allowed the implementation of a sustainable management system. In this and other cases mention was made of the importance of relations between communities of users and the public administrations, which must be based on mutual respect, avoiding patronising attitudes. 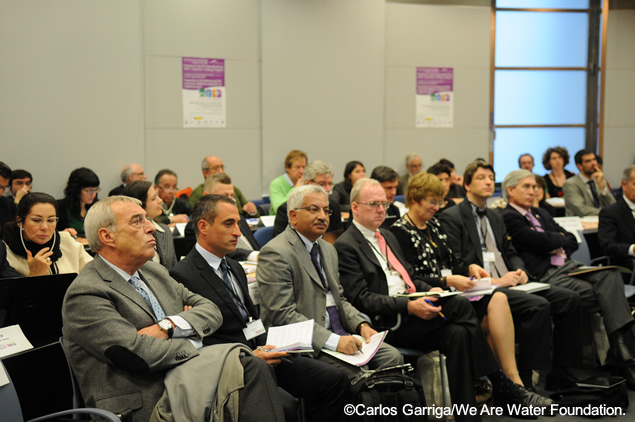 In this sense, the director of the UN Water Office, Josefina Maestu, pointed out: "Achieving cooperation in water is the result of a long-term process, so that time, patience and mutual trust are essential".

Another subject of great importance thrashed out at the Zaragoza conference was that of water management in the cities based on its reuse. This concept is already being applied in all the models of smart cities, as Brice Lalonde pointed out, head of Rio+20 in the Department of Economic and Social Affairs of the UN: "We are entering into an era of reusing water, which is particularly necessary in cities".

The problem of sanitation is enormous, since today there are still around 2½ billion people without access to suitable sanitation in the world. In this sense, emphasis was given to the importance of learning to cooperate to recycle between different uses and sectors, as an absolute must.

The final day of the conference reported close-up on the experience developed in Spain in the Ebro basin by the Hydrographic Confederation as a participative model exportable to other countries. Several cases of inter-institutional cooperation and collaboration were also discussed, such as the Spanish Cooperation Fund for water and Sanitation, solidarity experiences in Aragon and cases of participative processes in Navarra.

Although the cooperation presented during the conference were very different, they all coincided in that in order for cooperation in water management to be a reality what are essential are the political will, the legal frameworks, transparency and the institutional structures. 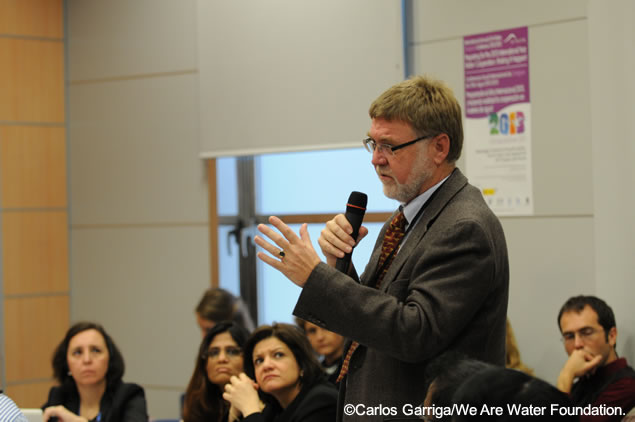 Blanca Jiménez, Director of the Water Science Division of UNESCO summed up the conclusions of the Zaragoza conference perfectly: "Understanding the mechanisms in which water is used, contaminated and in some cases purified and how societies interfere with the water cycle in quantity and quality provide the scientific platform with information to debate the way in which the different users must cooperate to achieve environmental sustainability".

The We Are Water Foundation was present in this year's conference and collaborates with the UN Water Decade Programme on Advocacy and Communication (UNW-DPAC); it also shares the same principles and actions through its cooperation projects, in the framework of World Water Day.

Josefina Maestu from We Are Water Foundation

Thus Josefina Maestu, Director of the UN Office of support for the Decade, thanked the Foundation for its support and involvement with UN Water in this international forum, and for sharing their same values of cooperation in action: "We have organised an event in Zaragoza, of which I must say I feel very satisfied for having been able to count on the collaboration of the We Are Water Foundation; we have worked on questions of great importance, such as cooperation in the world in order to achieve better water management and, above all, how to put it into practice".

Additionally, Xavier Torras, Director of the We Are Water Foundation, highlighted this opportunity of collaboration with UN Water: "We undoubtedly share a common spirit of cooperation with UN Water. We are delighted to be able to establish collaborative ties with them and be able to participate in these world-scale conferences. These types of actions are fundamental to be able to contribute to change, which will not be possible without the joint effort of everyone".

The Foundation, since its beginnings, has applied and promoted tools based on cooperation, in different countries, through different projects that are adapted to each culture and each situation: from the point of view of education, infrastructure, activation of the own resources of each community, among others; while also with its initiatives seeking to inform and raise awareness based on the values that reigned during this conference: trust and understanding between different cultures and countries.

The conference organised by the UN Office of support for the UN International Decade for Action "Water for Life" 2005-2015/Programme of UN Water Decade Programme on Advocacy and Communication (UNW-DPAC) took place from the 8 – 10 of January 2013 in Zaragoza, Spain.

The main goal of the "Water for Life" Decade is to promote efforts in order to achieve the international commitments made with water for 2015. These commitments include the Millennium Development Goals to reduce by half the proportion of people without access to drinking water and sanitation by 2015 and halt the unsustainable use of hydric resources. http://www.un.org/spanish/waterforlifedecade/

The UN Office of Support for the International Decade for Action "Water for Life" 2005-2015, based in Zaragoza, Spain, implements the UN Water Decade Programme on Advocacy and Communication (UNW-DPAC). UNW-DPAC facilitates and undertakes activities of communication, information and raising awareness in the setting of the Decade. The Department of Economic and Social Affairs of the UN (UN-DESA) leads the Office. http://www.un.org/spanish/waterforlifedecade/unwdpac.shtml

The We Are Water Foundation, promoted by the Roca company, aims, on the one hand, to raise awareness among the general public and the administrations about the need to encourage a new culture of water in the world and, on the other hand, to alleviate the negative effects relating to the lack of hydric resources, through the development of cooperation and support projects alongside diverse organisations such as Education without Frontiers, the Vicente Ferrer Foundation, Intermon Oxfam and Unicef.