One planet, one ocean… one water

This is the second time that the We Are Water has taken part in the Barcelona World Race with the theme of There are messages that have to go around the world. Bruno and Willy García take over the pendant that in the previous 2010/11 regatta was carried by Jaume Mumbrú and Cali Sanmartí, and carry the message of the Foundation in the only two-handed round the world regatta without stops.

14 meridians for just one message

Jaume and Cali sailed around the world crossing the eight meridians of the projects that the Foundation was undertaking. After four years, the completed projects and those in progress number 20, and are grouped into 14 meridians that are those that the García brothers will cross.

These meridians, in the order in which the We Are Water will cross them, correspond to the projects in Guinea-Bissau, Morocco, Ghana, Chad, Democratic Republic of Congo, Ethiopia, India, Bangla Desh, Philippines, Nicaragua, Ecuador, Colombia and Brazil.

“This project has several aspects, sporting, human and of solidarity, and for us, the union of the three is basic” stated Bruno García shortly before setting sail. The message of the We Are Water Foundation travels once again to spread knowledge about the serious lack of water and sanitation in large parts of the planet, and to raise awareness in the world about the need for immediate action.

The scientific and technological development in the interests of sustainability has been one of the main philosophical lines with which the Barcelona World Race was founded. Now in its third editions, the regatta has been a pioneer in ocean sailing on forming a platform of experimentation and communication to collaborate with oceanographic science with the aim of improving knowledge about the ocean and sending out warning and awareness-raising messages before the clear alteration of seawater.

In this year’s Barcelona World Race these messages are boosted by the scientific and education projection of the regatta, which is collaborating closely with the Intergovernmental Oceanographic Commission of UNESCO (IOC-UNESCO), and goes deeper into its slogan One Planet, One Ocean with the intention of explaining to the world that the problems of planet Earth cannot be isolated one from the other. These were the conclusions reached by the scientists who met in Barcelona at the 2nd International Ocean Research Conference last November, the most important oceanographic event of the decade, organised by the IOC-UNESCO together with the Barcelona Ocean Navigation Foundation (FNOB), the organising body of the Barcelona World Race and in which the We Are Water Foundation took part.

During recent decades scientific advances have been increasing intrinsically linked to a sustainable vision of the world in which solidarity is an essential human factor in any knowledge-development project. These principles form part of the DNA of the sport of ocean sailing which, since the creation of the first regattas, has constituted an enormous platform of knowledge and awareness of the problems of the sea, and yachtsmen have been front-line ambassadors of them. 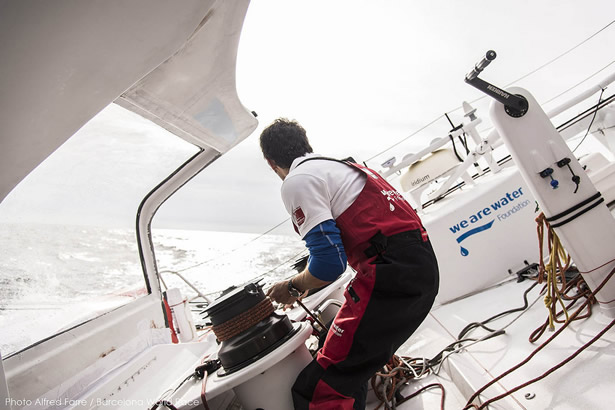 The We Are Water, and its regatta colleagues, will navigate on its journey through 12 of the climatic zones of the world; they will go through the remote Austral ocean, a very little-studied region that is key in understanding climate change, where they will launch a buoy, Argo, to collect vital data about the salinity and temperature of the sea. Bruno and Willy will be key witnesses of the state of the oceans, of changes in sea life, of the meteorological phenomena and of the evolution of the Antarctic thaw. They will inform us of their experiences and will enable us to experience close-up the relationship between all the phenomena that depend on the water cycle on the Earth.

You can follow the Barcelona World Race of the We Are Water at:

You can see the projects of the We Are Water Foundation at: