Optimism for the Millennium Development Goals After the Rio+20 summit, the UN presented the report about the Millennium Development Goals 2012. The study points out an optimistic and in some way positive result, since three years before the deadline set at 2015, three specific goals have been achieved, of the eight that the report considers. Fundamental goals related to poverty, slums and the supply of drinking water.

According to relevant and confirmed data, expressed in the report of the Millennium Development Goals (MDG) 2012, between 1990 and 2010, more than 2 billion people had access to improved sources of water, such as supplies of channelled water, protected wells and correct sanitation installations; which translates into a notable improvement in living conditions for more than 200 million people in shanty towns and managing to reduce by half the percentage of people without access to an improved source of drinking water before 2015. Moreover, between 2000 and 2012, the urban population of the developing countries who lived in slums decreased from 39% to 33%.

There is still a lot to do

The report also refers to the Millennium Development Goal 7 (MDG7), which focuses on guaranteeing the sustainability of the environment and natural resources, as well as energy and ecosystems. The undertaking of this objective depends on international cooperation and is intrinsically linked to questions of health, such as combatting malaria, as is explicit in the UN report. Migration is another key aspect in that it influences the growth of marginalised districts in the cities.

Five years before the deadline, the MDG7 related to water was fulfilled in 2010, while the report shows that sanitation coverage increased in the developing regions from 36% in 1990 to 56% in 2010. Although this is progress, it should be pointed out that nearly half of the world's population still lacks access to improved sanitation installations.

This objective of Millennium 7 or MFG7 is focused more specifically on reducing by 50% the people in the world who do not have access to hydric resources and suitable sanitation; a challenge to be met, as a deadline, in 2015. 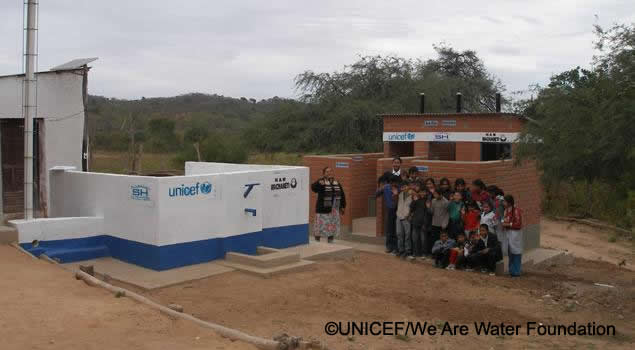 According to the WHO (World Health Organisation), thanks to the agreement of the MDG, the percentage of people in the world with access to and a better supply of hydric resources/water between 1990 and 2008 increased by 10%. However, there is still a big difference between the rural and urban areas which will have to be reduced.

Regarding sanitation and hygienic infrastructures, we still have a lot of work to do; even in 2008, 2.6 billion people still had no or did not use suitable or improved sanitation installations.

The WHO also points out the need to continue working on the compliance of the guidelines on the quality of drinking water, the safe use of waste waters in agriculture and aquaculture and safe management of recreation water. According to the organisation we must continue providing countries with guidelines, capacities and optimum practice models. The WHO will continue reporting on the evolution of the normative, institutional and financial questions relating to sanitation and drinking water through the Global Analysis and Assessment of Sanitation and Drinking Water of the Water Group.

The commitment of the We Are Water Foundation to the MDG

In this sense, the We Are Water Foundation has been committed since its beginnings to the MDG. It collaborates on projects with different organisms and has achieved the objectives set by the United Nations regarding the millennium through different projects that cover the problems arising from lack of hydric resources with a global treatment of the situation, considering its educational and sanitary side and the adaptation of infrastructures. In terms of positive data, the projects completed by the Foundation in 2011 benefitted more than 245,000 people (See projects).

Ban Ki-moon: "There is no reason to relax"

Although the goals achieved, according to this year's report give rise to optimism and are ahead of the forecasts in terms of the specific deadline, during the presentation of the report in Río de Janeiro, the secretary of the UN Ban Ki-moon gave a warning call to all the members and heads of the WHO: "These results represent a tremendous reduction in human suffering and are a clear validation of the approach embodied in the MDG. But they are not a reason to relax. Projections indicate that in 2015 more than 600 million people worldwide will still lack access to safe drinking water, almost one billion will be living in extreme poverty and hunger will remain a global challenge".

The We Are Water Foundation, promoted by the Roca company, aims, on the one hand, to raise awareness among the general public and the administrations about the need to encourage a new culture of water in the world and, on the other hand, to alleviate the negative effects relating to the lack of hydric resources, through the development of cooperation and support projects alongside diverse organisations such as Education without Frontiers, the Vicente Ferrer Foundation, Intermon Oxfam and Unicef.