Water and Energy, an indivisible pairing

Within the setting of World Water Day (22nd of March), the We Are Water Foundation, in line with its philosophy since it was founded, is this year supporting diverse callings to social actions and awareness of the population at an international level.

On the 20th of March in the Roca Barcelona Gallery it is organising a round table discussion, Water and Energy, the challenge of efficiency, which is fully within the remit of the subject matter designated by the United Nations for 2014.

Water and Energy, the challenge of efficiency takes the form of a constructive and participative debate, and looks into this indivisible pairing from a technological, scientific, educational and caring perspective.

With the aim of taking on these challenges in seeking new solutions from the cooperative perspective of the Water-Energy nexus, taking part in this event will be specialists from the scientific and technical sphere and representatives of the educational and solidarity sector in order to explain and share information and ideas and attempt to form specific proposals.

A major objective of this round table discussion is to achieve an exchange of know-how, create synergies of communication and plan inter-sectorial strategies that help us face up to this challenge and join forces for greater socioeconomic growth.

The debate is framed within the context of the exhibition titled Water, the right to a decent life by the We Are Water Foundation, which can be visited at the Roca Barcelona Gallery until the 19th of April. The We Are Water Foundation is also supporting, within the setting of World Water Day, solidarity and awareness actions at an international level. The activities are being undertaken with the aim of raising funds for the Foundation’s simultaneously in 12 countries: Bulgaria, Portugal, United Kingdom, Brazil, Dubai, France, Poland, China, Russia, the Czech Republic and Argentina.

Without energy there is no water and without water there is no energy: information for reflection

The United Nations plans to introduce the subject of water and energy as one of the priority points in the Post-2015 development agenda and in the conceptualisation of the Sustainable Development Goals (SDG).

Recent data provided by UN Water shows clearly the intrinsic relation that exists between water and energy and warns of the problems that await us in the immediate future. At the last 2014 Annual Conference of UN Water that was held from the 13-16th of January in Zaragoza, the intrinsic and close relationship between both resources and the magnitude of the problem to be solved was left patently clear.

In 2010, 15% of all freshwater extractions were used for energy production. This figure is only surpassed by agriculture and is the equivalent of 580 million cubic metres. Put another way: the energy sector absorbs water at approximately the same speed as the flow of the Ganges or the Mississippi, two of the largest rivers in the world. Most of this water is used not only for hydroelectric production but also for the cooling of the power stations. On the other hand, energy is essential for the supply of water and necessary for the systems that collect, transport, distribute and treat it.

Additionally, in 2050 the demand for water could surpass by 44% the annually available resources, whereas the demand for energy could increase by 50% between now and then. Furthermore, water and energy suffer limitations in many regions as a consequence of economic and demographic growth and of climate change, which will enlarge its reciprocal vulnerability.

Added to this, today 1.4 billion people lack access to electricity and more than 850 million do not have access to an improved source of water. And what is even more disconcerting: 2 billion more people will need access to water and energy between now and 2050. 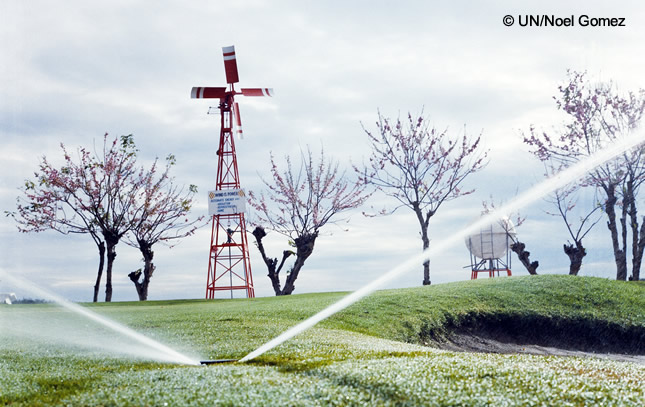 This is why UN Water has presented the close relationship between these two elements as one of the key factors to take into account in the Post-2015 Development Agenda and in the conceptualisation of the Sustainable Development Goals (SDG): the water and energy sectors must go hand in hand, and we cannot contemplate a world in which both concepts advance independently and this is a vital factor to ensure that we can continue providing services in a not too distant future.

The conclusions of the Conference will stress that there is not a general solution applicable to any situation, which is why alliances at a local level are so important. Local know-how is essential when dealing with the problems that are posed and is one of the critical factors of success.

These conclusions will serve as the basis for producing the key messages of cooperation that the World Water Day campaign will use this year and will be the first lines that will draw, step by step, the panorama on the Post-2015 Development Agenda.